By the end of the assignment, you will have gained experience in writing programs using with simple event-driven input (mouse, buttons, etc).

Download the zip file and extract it to your home folder. It should contain template for the Java program you are to complete. Read through the whole assignment to see what you need to do. You can run the demo programs on the ECS lab computers. Go over the code examples in slides from the lectures on GUIs and Event-driven input.

Submit your best version of MiniPaint.java and your UnderstandingJava.txt files by the due date. Remember to click the button for the final step of the submission process after you have uploaded the files (which does some automated checking for you). You may talk with other students about the assignment but you must write and submit your own code. If you use code that you got from someone else, you must put a comment explaining where you got it.

For this question, you must design and implement a simple paint application that lets a user draw simple pictures on the screen. There are many commercial software applications that allow you to draw pictures using a computer. Most of them have a lot of commands and would be complicated to write. For this assignment, you are to write a simple version of these applications called MiniPaint. MiniPaint provides a set of "tools" for drawing different kinds of shapes, (lines, rectangles, ovals, text, and images). The user can use the mouse to draw using the current tool and can click on buttons to change the brush-shape. There are also buttons to clear the screen, and to set various options, such as toggling between outline shapes and filled shapes, setting the line and fill colours, setting the line width and setting the text size. It is important to watch the demo video in order to see how the program should work. The MiniPaint class has MiniPaint should have the following widgets (buttons, sliders, etc): Note that none of the buttons (except Clear) actually change anything on the graphics pane when they are selected. All actual drawing happens in response to releasing the mouse on the graphics pane. The effect of a button is to change the internal state of the program, so that the next mouse release will draw a different shape.

Implement MiniPaint so that it will Hint: The most common difficulty that students have is working out exactly when and where everything should happen. Make sure that you watch the demo video and notice what happens when buttons are clicked and what happens when the mouse is pressed, released, or dragged on the graphics pane. Notice especially that when you click on the buttons (except the Clear button), the program does not draw anything - all it does is to remember which button was chosen. It is only when you release the mouse somewhere that it actually draws a shape (or image). What shape it draws depends on what tool it is currently set to.

Add the following features to your program: 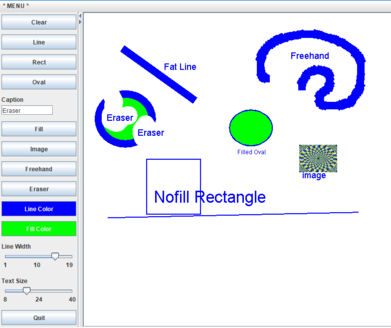 Marking Guide: The first one is 5 marks. We add 10 for each of the other three till you get 20. For example, do any two of the last three will give you full marks. There are lots of ways in which this program could be made nicer to use. For example you could add some of the following (or something else interesting):

Answer the following questions in the UnderstandingJava.txt file, and make sure you submit it. 1. What are the general rules for defining a field or a method private or public? When do we define something public static final?
2. In your own words, explain what an object is and what a class is. Give examples to explain when you need to create an object.
Print version | Backlinks |