An Alumni Evening with Rowan Simpson

27 Oct 2011 - 15:14 in Event
The Faculty of Engineering was delighted to host a presentation entitled "The Mythical Startup" by alumnus Rowan Simpson (BSc in Computer Science). Rowan, who graduated in 1997 is an experienced software developer passionate about creating great products that people love to use. In 1999 Rowan Simpson built and launched flathunt.co.nz, which later became part of Trade Me Property. Rowan worked at Trade Me from 2000 and saw the site grow from 10,000 members to 100,000 in just over 18 months. He then worked in London, and travelled through Europe, before returning to Trade Me in 2004 to lead the growing software development team and then the product team. From 2007 until 2008, Rowan was employed by Xero in a product strategy role. In 2010 Rowan co-founded Southgate Labs, a software studio specialising in web and mobile applications. He continues to advise a number of early-stage ventures, including Vend, Fishpond, Sonar6 and SMX.

100% of First Cohort of BE Alumni in Graduate-level Employment

17 Oct 2011 - 15:55 in Achievement
All Bachelors of Engineering alumni have gone on to find graduate level employment since graduating May 2011. This illustrates both the need for digitally focused engineers from the four specialisations (Software Engineering, Network Engineering, Electronics and Computer Systems Engineering) and their quality. Employing companies include big-names such as Google (Australia), GNS, Fisher & Paykel Healthcare and Aviat Networks. Small (agile) companies and start-ups, such as Code to Customer, have also recognised the talents and transferable skills gained through four years of dedicated study. The breadth of jobs available to you is amazing, e.g. working for the Ministry of Justice for their software and networking needs. The high technology and state-of-the-art nature of the jobs is illustrated by one of you who has joined FNZ who are interested in 'enterprise cloud computing and services company in the wealth management sector'. It is also really pleasing to note that five of you have stayed on to indulge your passion for learning in Masters degrees. This has included attracting lucrative scholarships from companies (Im-able Ltd), government (TechNZ scheme) and the University. With greater emphasis being placed on Graduate employment levels by government it is excellent to see the continued contact that you have with the School and the Careers service who are available to assist both students and graduates in finding their perfect job.

22 Aug 2011 - 15:39 in Achievement
At the end of last year, Snapper announced a Summer of Tech challenge: how using Snapper technology would make every day easier. The winning project was submitted by Brendan Vercoelen and Troy Patrick who graduated from Victoria with a B.Eng and a B.Sc respectively. Their solution was based on using a near-field communication (NFC) enabled phone for charity donations. In the judges' opinion Brendan and Troy provided a good business case and technical solution in their submission. http://www.snapper.co.nz/newsroom/2011/05/16/congratulations-to-our-summer-of-tech-winners/ 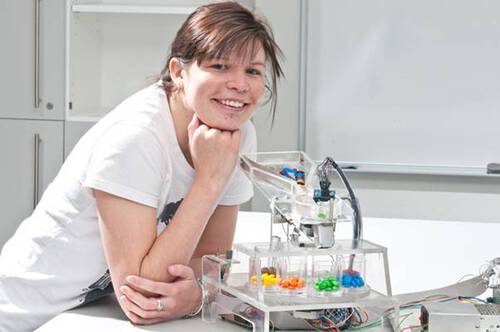 A machine that automatically sorts M&M chocolates into their different colours that recently featured in the Dominion Post (19 May 2011) is the brainchild of one of Victoria's first Engineering graduates. Dayna-Maree Kivell built the M&M sorter for her final year project and this week will graduate with her classmates, the first graduates of the Bachelor of Engineering. The M&M sorter uses a colour sensor that scans each M&M. The sensor looks at the amount of red, green and blue in each M&M to identify the colour before placing it in one of eight containers, one for each colour. "It determines the colour very quickly," says Dayna-Maree. "After that a turntable at the bottom rotates to allow the machine to drop the M&M in the relevant container. It all takes about five seconds". "The idea was to simulate an industrial process - a car assembly plant for example - by using a programmable logic controller. We chose a sorting process and decided on the M&M's because they demonstrated this process very visually." Dayna-Maree is now doing her Master's in Engineering and is working on developing materials and devices that can be used in ultrasound applications, such as medical ultrasound imaging.

Congratulation to our first Cohort of BE Graduates 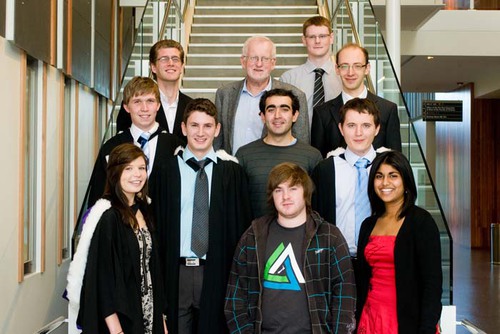 The Faculty of Engineering congratulates the inaugural group of Bachelor of Engineering (BE) graduates. Of the graduating students, around half are currently working in the industry and the other half has gone on to further study. Victoria began teaching the four-year Bachelor of Engineering degree in 2007, building on the University's existing expertise from teaching the Bachelor of Information Technology and Bachelor of Science and Technology degrees. The Engineering programme focuses on the digital technology that drives the modern world, from electronics to communications to software. "The Bachelor of Engineering at Victoria has gone from strength to strength and last year received a very positive report from IPENZ (the Institution of Professional Engineers of New Zealand), which provided provisional accreditation for the degree", says Professor John Hine. The graduation of the 14 BE students was also celebrated by family, friends, University staff and supporters at a luncheon on the 17 May 2011. The event gave the graduates and staff the chance to catch up and reflect on the last 4 years.
Print version | Backlinks |